100th Anniversary of Women having the right to stand for election: Equality organisations call for urgent action to tackle gender imbalance in Welsh politics

Equality organisations in Wales have today (Wednesday 21 November 2018) called for political parties to take urgent action to increase the diversity of politicians in Wales.

Wednesday 21 November marks the 100 year anniversary since the Parliament (Qualification of Women) Act 1918 came into force, giving women over the age of 21 the right to stand for election as an MP. 100 years later, Wales remains a country with a stark gender imbalance in positions of political power.

The Equality and Human Rights Commission, the Women’s Equality Network Wales and the Wales Assembly of Women raised the gender imbalance in Welsh politics at a meeting with the First Minister on November 7.  The meeting was arranged after Jane Hutt AM requested in plenary that the First Minister meet with the Welsh delegation that recently provided evidence to the UN as part of the UN’s review of how the UK is complying with the UN Convention on the Elimination of All Forms Discrimination Against Women (CEDAW).

Following the meeting on November 7, the First Minister Carwyn Jones said: ‘I was pleased to meet with the Equality and Human Rights Commission, WEN Wales and the Wales Assembly of Women recently to discuss the importance of taking forward women’s rights in Wales.

‘I have committed to Welsh Government becoming a feminist Government. We know that Government and political parties still have a long way to go towards gender equality, not least in the make-up of elected representatives. I would like to see our political institutions being 50:50 gender balanced.

‘My Government is currently taking forward a Review of our gender equality policies.  The UN Convention on the Elimination of All Forms of Discrimination Against Women is a vital tool to securing women’s rights in Wales and across the UK. We are considering a range of options for incorporating the Convention (and potentially other international treaties) into Welsh law, policy and implementation.’

‘Today just 28% of our councillors in Wales are women. To be a real feminist government, the Welsh Government, working with the Assembly Commission and political parties, needs to commit to achieving 50:50 representation at every level – such as in the Assembly and at local council level  – and then help us make that happen. CEDAW allows states to take ‘special measures’ and we’d like to see Welsh Government and political parties implementing such measures, for example by using quotas for 50:50 representation. We were delighted to meet with the First Minister to talk about this and welcome his commitment to 50:50.’ 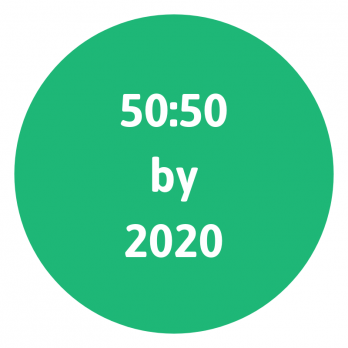 Ruth Coombs, Head of Wales at the Equality and Human Rights Commission, said: ‘Wales remains a country of deep gender inequality. This is no more apparent than in the gender imbalance of our politicians. It is simply shocking that Wales has only ever had 19 women MPs. And there are no ethnic minority women in the National Assembly.

‘This is bad for women and it is bad for Wales. Greater diversity in political representation would help ensure that everyone’s perspective is taken into consideration when decisions are being taken.

‘The UN Convention on the Elimination of All Forms of Discrimination Against Women (CEDAW) provides one valuable way to ensure women’s rights are promoted and protected. The Welsh Government has incorporated the UN Convention on the Rights of the Child into law – and utilising CEDAW presents another opportunity for Wales to lead the way.’

Professor Jackie Jones, Chair of the Wales Assembly of Women, said: ‘We have called for the Welsh Government to incorporate the UN Convention on the Elimination of All Forms of Discrimination Against Women (CEDAW) into Welsh law. The Convention provides a mechanism to ensure that gender equality is central to Government decision-making and promoted and protected across all areas of life.’